From TuHSPhysicsWiki
Jump to: navigation, search 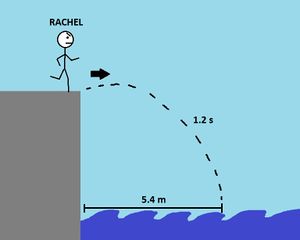 1. Rachel jumps off the edge of a cliff and hits the water 1.2 seconds later, about 5.4 m from the base of the cliff. a) What height was the cliff? b) With what speed did she leave the edge? c) What were her components of velocity upon striking the water? d) What was her velocity of impact? e) what was her velocity exactly 0.80 seconds after leaving the cliff edge? (Express as an angle and magnitude) f) what was her displacement exactly 0.80 s after leaving the cliff edge in terms of components? (how far out, how far down)

Let's start by making a table with the information we know:


a) The equation you need to find the vertical distance is:

. You are already given u, a and t. And oh hey. Since u = 0, you can simplifyy the formula and make your life a little easier. The formula is simplified to:

b) To find the initial horizontal velocity, you use the same formula that you used to find the vertical distance. Except this time, the acceleration is zero, so the second half of the formula cancels due to being multiplied by zero. The simplified formula is:

Now, guess what? The initial and final horizontal velocities are the SAME. Less work for the both of us.

BOOM. We can answer the question. 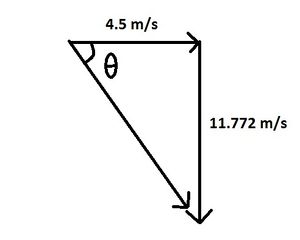 d) Let's start with drawing a pretty triangle using the components you solved for in Part C. All finished? Lovely. Now you need to solve for the magnitude and the angle of the traingle to figure out the velocity of impact. Let's go back to some basic geometry.

e)All right. We know the values for everything except the vertical distance and final velocity. To make this easier, let's make another table.

To find the vertical velocity, use the same method you did in Part C. 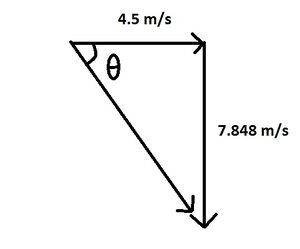 Now to express it in vector components. Yahoo!

Then just put them in component form, and BAM. 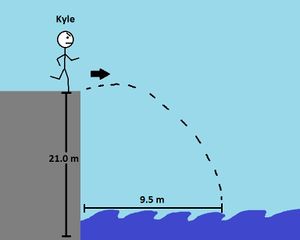 2. Kyle wants to jump into the water from a cliff that is 21.0 m tall. There are rocks that stick out 9.50 m from the base of the cliff. a) What time will he be in the air? b) What must his horizontal speed be in order to clear the rocks? c) What is his velocity of impact? What is his velocity in: d) vector components and e) angle-magnitude when he is 6.00 m above the water? (Hint – you need to use how far down from the cliff edge he is...)

Make another SUVAT table and fill in what you know.


a)Okay, so we need to find out how long he is in the air. The formula you need is:

. Since u = 0, the formula simplifies to

. Now you can plug and chug:

b)So, we need to figure out how fast this kid's horizontal speed needs to be so he doesn't go SPLAT against the jagged rocks below. The equation is pretty simple:

c)To find the velocity of impact, you have to solve for the vertical velocity using: 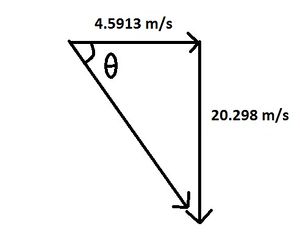 Now, let's set up a triangle to help us solve the problem and then solve for the hypotenus.

So, the velocity of impact is...

d)To solve "d", we need to make another table. To find the vertical height, you just subtract 6 m from the height of the cliff, which is 21 m.

Now, we can use that time to solve for the horizontal distance.

We can solve for the final vertical velocity now. Hoorayyy.

Finally, we can give an answer in vector components. 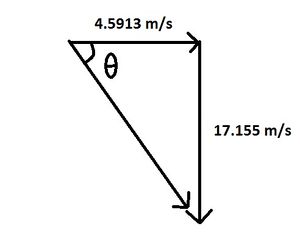 e)Gotta find the angle and magnitude, and then this problem will be completely solved! 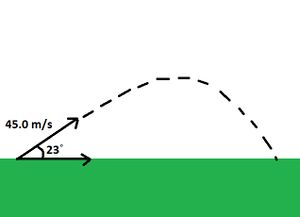 3. A golf ball leaves the ground at a speed of 45.0 m/s at an angle of 23.0o above the horizontal. a) What are the initial components of velocity in terms of x and y? b) What time is the ball in the air? c) How far does the ball go before striking the ground?

Mmkay, let's set this problem up.

So, we really don't know a whole lot right off the bat. That's okay. We can fix that.

4. An air rocket leaves the launch pad with a speed of 22.0 m/s at an angle of 78.0o above the horizontal. a) What are the initial components of velocity in terms of x and y? b) How far does it go before striking the ground? c) What is its greatest height? d) What is the rocket’s speed at its highest point?

Numero Cinco: THIS QUESTION IS SO SERIOUS.

5. An ordinary projectile leaves the ground at a speed of 27.4 m/s at an angle above the horizontal of 57.0o and strikes a wall 62.0 m distant. a) What is the greatest height the projectile reaches? b) In what time does it hit the wall? c) How high does it hit the wall? (Assume the land is level) d) What is its velocity of impact with the wall in terms of x and y components and angle-magnitude?

Here is my solution

7. A flaming explosive projectile is launched at an angle of 50.0o and a speed of 87.0 m/s from the top of a 56.0 m tall cliff above the ocean. a) What is its range? b) What is its velocity of impact with the water in terms of x and y components and angle-magnitude?

8. A water balloon enters a window that is 13.5 m above the ground with a velocity of 17.0 m/s and an angle of 23.0o below the horizontal. a) What are the final components of velocity as it goes through the window? b) From what distance from the base of the building was the water balloon launched? c) What was the launch velocity in terms of x and y components and angle and magnitude?